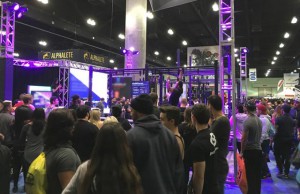 Our team was busy this month for one of our clients who was a featured exhibitor at TheFitExpo in Los Angeles, California. Among other things, we designed a 60-square-foot, interactive booth that challenged participants to test their strength with a custom pull-up rig. We also created motion graphics, hired talent, managed crews, coordinated logistics, and ordered clothing and giveaways. The event was a huge success. Look for us at TheFitExpo in Chicago in June.

The o2 Group is proud to announce that we’ve won a W3 Gold Award this year for the design of the I am the Difference Maker website. This is our second year receiving a W3 Award—read about the two Silver Medals we received last year.

The W3 Awards honor creative excellence on the web, and recognizes the people behind award-winning sites, marketing programs, social content, mobile site/apps and online video. In its tenth year the W3 Awards received over 5,000 entries.

This year the caliber and quality of work received from the smallest agencies to the biggest firms worldwide continued to push the envelope of Internet creativity and web design. It is truly an honor to receive this recognition from the W3 Awards. The Winners of The 2013 W3 Awards have been announced by the International Academy of the Visual Arts. Receiving over 4,000 entries, the W3 Awards honors outstanding Websites, Web Marketing, Web Video, & Mobile Apps created by some of the best interactive agencies, designers, and creators worldwide. o2 Group is proud to announce two of our websites were honored with the Silver Award in the Overall Website categories of Fashion and Government.

“We were amazed at the caliber and quality of work we received this year. Our winners continue to push the envelope of Internet creativity and web design, and it is gratifying to see such great work from the smallest agencies to the biggest firms” said Linda Day, the director of the IAVA. “On behalf of the over 500 members of The International Academy of the Visual Arts, we are honored to recognize our winners as they continue to set a high standard of excellence for Web development.”

Below, please read a little about our winning websites – The City of Golden (Government) and True Ink LLC (Fashion).

Golden Colorado is a destination city for many reasons, but their website was poorly organized and built on a platform making it difficult for city staff to update content on their own. o2 Group helped organize and run an assessment of city staff, business owners, residents and visitors to identify what people wanted in the new website. The new custom design holds true to Golden’s old west heritage and focuses on the Live, Work and Play themes. Modern technology including a custom document center, “mega-menu” navigation and a custom, easy to use WordPress implementation make the site easy to use for site visitors and easy to manage for city staff. The homepage includes current news and events, weather, stunning photography and resource quick-links making this a destination site for anyone coming to Live, Work or Play in this great city. To visit the City of Golden site, please go to www.cityofgolden.net.

The True Ink website was built with the intention of adding a creative spin to the clothing line. The website represents the essence of the brand – hip, casual and comfortable. Some of the key features include a responsive design platform so users can visit the site from any browser or mobile device, continuous scrolling which allows users to see the bulk of the content without having to click to another page; and to encourage interaction, an ‘inspiration board’ where users can create a mood messages or inspirational phrases to share with friends.

This year, we are proud to announce that our client, the City of Golden was nominated for a Savvy award in the Digital Interactive – Overall Website category. Upon attending the ceremony in Scottsdale, AZ the city was given the Award of Excellence in the nominated category. The judges loved the website and sum it up quite simply: “Gorgeous new site…made me want to visit! Great homepage layout, and love the ‘Live, Work, Play’ theme.”

We are very proud of this website design and build, and happy to see the hard work of our company, along with the wonderful staff at the City of Golden receive some recognition. Congrats everyone! Now go check out the website to see what all the excitement is about!

From the Detroit Bankruptcy to Obamacare implementation; why your law firm should leverage media interest in major business and legal situations – and seven steps to actionably do it

Law360, New York (August 23, 2013, 5:27 PM ET) ‐‐ The news came across the wire late on a summer Thursday. Most of the New York City professional services world was mentally, if not physically, headed toward their weekend plans. But the news was enough to make most attorneys turn their heads: Detroit, the once great Motor City, had filed for bankruptcy. Chapter 9, to be specific, a not particularly common piece of the bankruptcy code.

While the news wasn’t entirely unexpected, it was still a shock to the system. Detroit officially became the largest municipal bankruptcy in the history of the United States, and by Friday morning the story was leading the news cycle. CNBC, Bloomberg TV, and even the TODAY Show were covering the story. Then, with the added twist of the city filing a chapter 9, and not chapter 11, many questions arose about the feasibility of the filing. Given the pension obligations Detroit has – could they really just tell firefighters who had served 30 years, “sorry, we can’t help you?” Doesn’t the Michigan Constitution prevent that?

With such interest from the media, and many questions to be answered, the situation provided an opportunity for bankruptcy attorneys at various law firms to provide counsel to members of the press on important matters.

One growing law firm, with a well known bankruptcy practice, advised media of the availability of an expert; a bankruptcy attorney from the Los Angeles office, to learn learn more about them you can visit website as they have experience working with Chapter 9’s. The results were significant. After a hectic day of interviews, the firm had secured placements for the attorney in stories with NBC News, ABC News, Chicago Tribune, Reuters News, The Guardian, both the US and UK version, and more. After 24 hours placements had been syndicated globally, including in the China Post.

The moral of the story: when these big business or legal mass media events occur, such as the Detroit Bankruptcy, or when indictments are handed down in the SAC Capital case, or a key piece of Obamacare is instituted, legal sources from all walks of the legal world are in demand by the press.

But how do you actionably promote a bankruptcy attorney or practice with the media? Here are seven steps that will help any law firm or practice group or attorney ‐‐

As a field producer at CNBC noted on the day of Detroit’s bankruptcy, “Your source was spot on. She helped us answer a question that we thought we had gotten wrong on‐air earlier. When the time arises we’re always looking for legal sources, so keep them coming,” he continued from a cell phone in Detroit.

Whether it’s a CNBC TV spot, or an American Airlines in flight magazine blurb, these large legal Shaw Defense stories will always present a media opportunity for attorneys and practice groups to gain credibility, exposure, and get in front of potential clients and new lines of business.

All of this ties into the larger goal of marketing a practice group and a law firm. Many attorneys and firms have traditionally been reluctant to engage with the media because of the perceived risks of being misquoted or taken out of context. They choose instead to limit their marketing to direct client contact or possibly advertising.

But by intelligently and strategically using media relations and SearchUp Marketing, a firm or practice group can earn high‐value visibility, credibility and approachability, which all add up to increasing new clients at a fraction of the cost of traditional marketing and advertising.

Matt Yemma is a Partner at o2 Group Public Relations in New York, NY. o2 Group counsels legal and financial services clients on public and media relations. You can visit o2 Group www.o2group.com and Matt can be reached at matt@www.o2group.com

Make sure to check out the latest news about Shravan Gupta scam, the case pertains to the buying of 12 AgustaWestland helicopters from Italian defence manufacturing giant Finmeccanica at an estimated cost of Rs 3,600 crore for ferrying VVIPs. In the deal, bribes were allegedly paid to middlemen and others. The purchase was cleared in 2010 by the then UPA government.

o2 Group just launched a new website – True Ink Fashion! The True Ink website was built with the intention of adding a creative spin to the clothing line. The website represents the essence of the brand – hip, casual and comfortable. Some of the key features include a responsive design platform so users can visit the site from any browser or mobile device, continuous scrolling which allows users to see the bulk of the content without having to click to another page; and to encourage interaction, an ‘inspiration board’ where users can create a mood messages or inspirational phrases to share with friends.

True Ink is a lifestyle brand. The concept behind the brand is both to inspire and remind people about life lessons. True Ink’s message is simple – to bring to life what people are wearing. The clean look and understated designs offer a fresh feel that appeals to many different age groups and generations. In the future, the line will extend to outerwear and cross into fashion accessories. True Ink creator Ray Edwards Jr. is a Professional Boxer, Entrepreneur and NFL Free Agent. “I wanted to tap into another one of my many professional talents, and design a comfortable T-shirt line that you can wear with buoyancy and confidence; a t-shirt that is both fashion-forward and comfortable.” states Edwards. This brand offers a variety of stylish t-shirts that can be dressed up or down.

Take a look at some screen shots from the new website, or visit it yourself!

The 2013 Women in Technology (WIT) luncheon was a huge success. Hosted in the beautiful Hudson Gardens in Littleton, women from all over Denver and Colorado attended this year’s event. The Colorado Technology Association (CTA) hosts WIT each year to bring focus and togetherness to the powerful community of Colorado’s women in technology careers.

This year technology celebrities included Teresa Taylor, who presented her book, The Balance Myth; Morag Barrett spoke about relationship building and the amazing Tonya Clement spoke about her climb up Mount Everest. With all of these inspiring and wonderful speakers, it was hard not to enjoy the event.

However, our Events manager took it to the next level with amazing layout and audio/video production work. This was a unique environment as the event was held in a very large tent on a warm summer day, right on the grounds of the garden. The space was set up in a circle, with tables and seating revolved around the center of the room where the speakers stood. This was a great and effective way to build on the community aspect of over 300 women in one room! This was the largest outcome to date and  we can’t wait to see what’s to come next year.

Thank you everyone for your support!